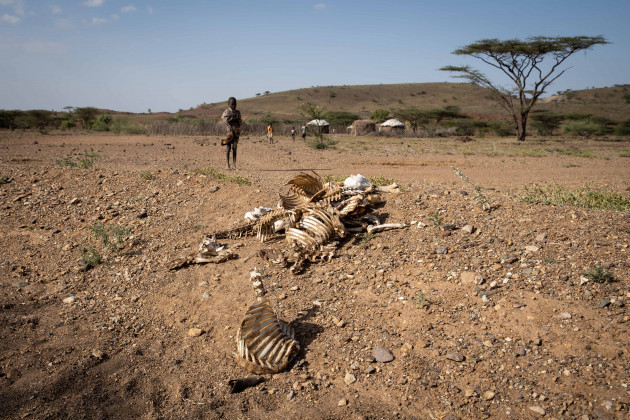 A heap of animal carcasses on the side of the road between Lodwar and Lokitaung in Turkana County, northern Kenya on 27 June.

THERE IS A sense of anticipation in the rural areas of Northern Kenya. Everyone is desperately waiting for one thing – the rains to fall.

It has been two years since substantial amounts of rain fell in Turkana County which is close to the borders of South Sudan and Ethiopia.

Concern brought The Journal and other media to Kenya to report the impacts of drought on millions of people in different parts of the country.

Turkana was the first stop on the trip. It’s the biggest county in Kenya and spans an area a bit bigger than the Republic of Ireland. Around 926,000 people live there.

Four consecutive rainy seasons have failed to deliver enough rainfall. The drought was declared a national disaster by the Kenyan president last year.

It has resulted in livestock dying, malnutrition and low water supplies.

Livestock is a key source of income and food for many people in rural areas. Without it, they have no way to make money. 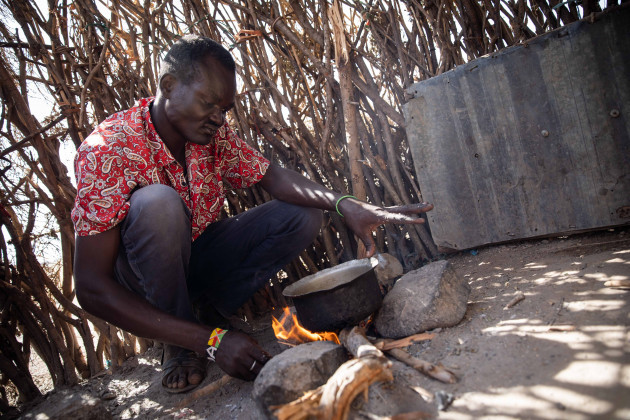 Ereng Kaleng Kalimapus (30), a pastoralist in the village of Milima Tatu in Turkana, said “all of the animals will die” and people will lose their livelihoods if it doesn’t rain soon.

His animals have been impacted by diseases and the lack of food and water available.

“When the rains failed the area became dry [the animals] could not even graze, ”he told reporters *.

Many animals died and even those that remained were really emaciated.

Earning money is close to impossible for people in his village and now accessing food is becoming more and more of a concern.

Even if the rains arrived now all the problems would not be fixed.

Vegetation recovers quickly after rainfall but the damage has already been done to the health of many animals.

If livestock aren’t moved to suitable areas when the rains arrive with force, they can also be washed away in the deluge. 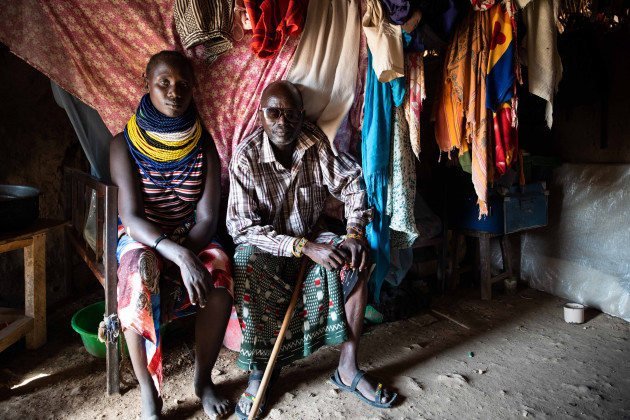 Richard Ekale Nakalale and his wife pose for a photo at their house in Milimatatu Village, Turkana County in Northern Kenya on 27 June 2022.

Richard Ekale Nakalale (52), a man from the same village, had 146 animals before the drought began.

He has since lost all 60 of his sheep and a number of other animals such as goats. He has 38 animals left and worries he will have none within a few years.

Richard said his animals started dying in September last year. He said 2022 has been the worst year for him in living memory.

He has lost sleep worrying about his livestock and felt he was “becoming crazy”. 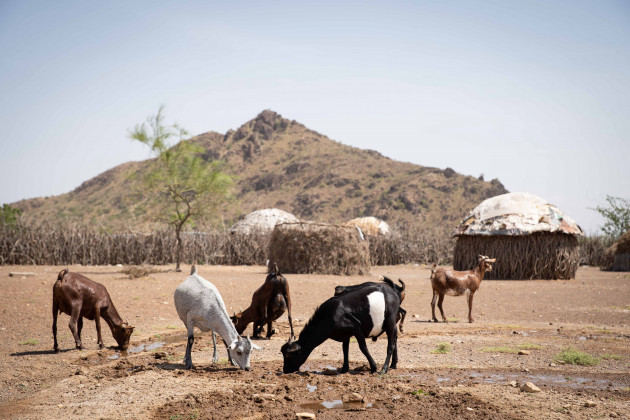 People in this semi-arid area are well used to surviving through periods of drought. But problems worsen when the drought continues for a long time.

That’s the current situation across many parts of the country. Although some areas have seen bits of rainfall here and there, there has been no substantial rain.

This will have long-term impacts for communities dealing with lost livestock, no way to make money and higher levels of malnutrition.

People like Joseph Ikitela, from Kapua in Turkana, are digging for water by hand to try and find a steady supply for their communities.

A well in his area is estimated to dry up at the end of this year. In the meantime, Joseph has been digging holes nearby in the hopes they too will produce water. 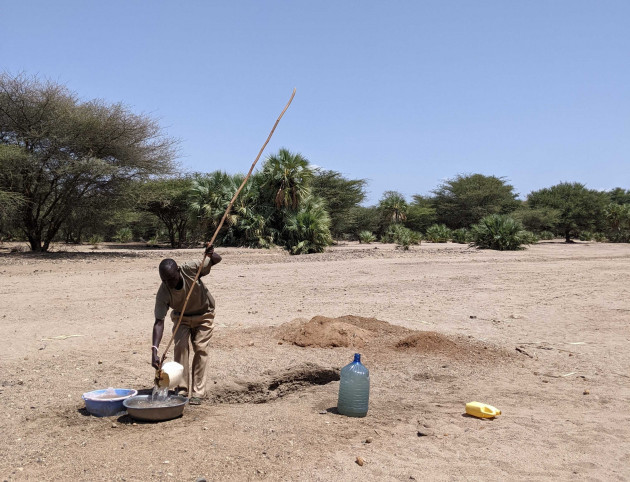 The current drought situation means he has to dig for days to figure out whether there is water.

He showed us the hole he has spent the past two days digging. He will dig for two more, and if he hasn’t hit water at that stage he will move on to the next one.

The digging is difficult and dangerous work – scooping out firm dirt with an old container, climbing down a man-sized hole until, hopefully, water is struck.

The one well that is producing clean, drinkable water has helped the community but unwashed containers and hands used to hoist the water out can sometimes leave it contaminated by the time it gets back to the village. 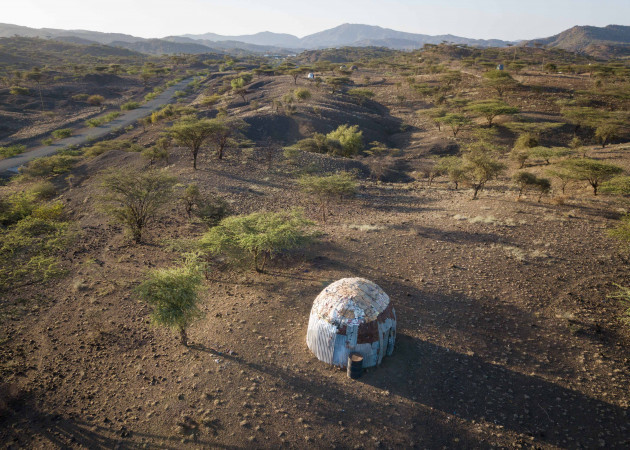 A house on the outskirts of Lokitaung in Turkana, Northern Kenya on 28 June 2022.

For the first time in 40 years, Kenya has had four consecutive failed rainy seasons.

If the next rainy season later this year also fails the situation will worsen for people across the most affected regions including Turkana.

Early forecast models predict there will be a fifth below average rainy season later this year.

No news is bad news
Support The Journal

Alongside the drought and malnutrition the rising price of food and fuel has hit people across Kenya.

The price of maize has at least doubled in many parts of the country. The country experienced fuel shortages earlier this year and cooking oil costs have more than tripled.

Livestock farmers are concerned their animals will not make it through another under-providing rainy season later this year and are not hopeful about the future. 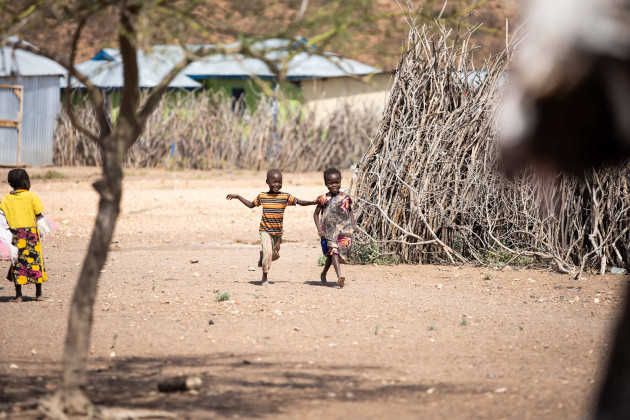 Their problems did not only arise with the drought and many were impacted badly by billions of locusts that swarmed east Africa in January 2020.

Experts have said global warming makes locust plagues more likely and that weather extremes brought on by climate change exacerbated the swarm in 2020.

This impacted farmers in Turkana County.

Villagers said the insects ruined their crops, harmed their livestock and left them worse off even before the drought was declared.

Richard Ekale Nakalale said that “you could not even see the soil” when the “wave of locusts” arrived.

Joseph Ikitela said the locusts destroyed the trees in his village and left his animals in poor health.

Drought issues that have always affected this region will only be exacerbated by the effects of climate change with extreme weather events becoming more frequent and temperatures rising.