The French have traditionally regarded the Coral-Eclipse much like English cheese, taking the view that both should be avoided in almost all circumstances.

Not since 1960 has Sandown’s most prestigious Flat race been won by a raider trained in France, while the nation has not even been represented for 17 years. The Aga Khan has claimed almost every major middle-distance prize apart from the Eclipse, which has also never been won by Jean-Claude Rouget or Christophe Soumillon.

For the owner, jockey and trainer, a famous first triumph could be secured by their thrilling three-year-old Vadeni.

The son of Churchill had been defeated twice in Group 3 company before breaking his Pattern duck at the same level at Chantilly in May. He was good then but immeasurably better at the same venue when he completely outclassed 14 Classic rivals in the Prix du Jockey Club. Having traveled beautifully just behind the leaders, Vadeni unleashed an explosive turn of foot that quickly propelled him clear. The final winning margin was five lengths, with Soumillon able to start his celebrations 100 meters from the line.

With connections not certain the Prix de l’Arc de Triomphe should be Vadeni’s long-term aim, and mindful ten furlongs might prove his optimum trip, and a £50,000 supplementary entry has been made. It has placed Vadeni into a red-hot Eclipse, yet the manner of Vadeni’s most recent success has been enough to put him at the top of the big-race betting.

“It’s the right race to go for and he’s well, so we’ll take up the challenge,” said Rouget. 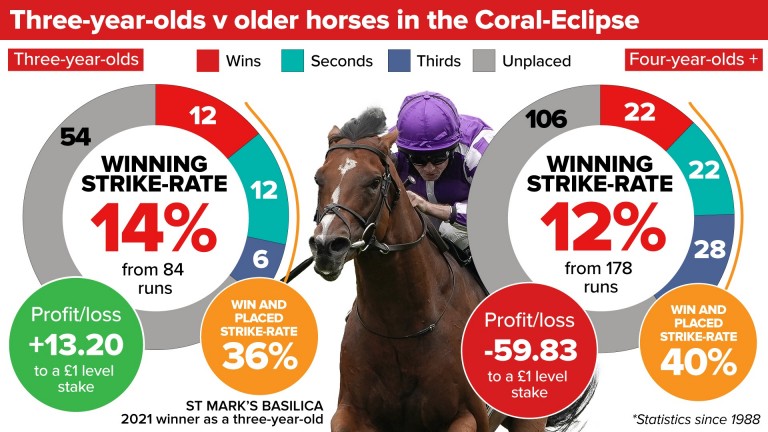 “I expect good ground, not too fast, which is absolutely fine for him. I don’t see any problems in terms of the set-up of the race and he’ll be ridden off the pace to relax in the hope he can show his acceleration. We don’t have any form lines with the others, so we’ll see.”

Javelot was the last horse to win the Eclipse for France 62 years ago, although the Francois Boutin-trained Trepan was a two-length victor in 1976 only to then be disqualified following a positive dope test.

The Aga Khan – whose grandfather bagged the last of his three Eclipses with Tulyar in 1952 – has had only one British runner in the last three seasons, while he has not had a winner in Britain since the Pat Smullen-ridden Harzand landed the 2016 Derby . He came closest to winning the Sandown Group 1 in 2000, when Kalanisi came within a head of denying Giant’s Causeway.

New trip and a new opportunity for Native Trail

One of the great joys of the Coral-Eclipse has been that it historically provides racing fans with the first clash of the generations. One of the great fascinations of this particular Eclipse is how the Native Trail will fare.

The striking son of Oasis Dream has been a marvelous three-year-old, but he was a slightly better two-year-old. This is an opportunity to send his trajectory moving back in an upward direction.

Last season’s champion juvenile has done little wrong this term, winning the Craven Stakes and Irish 2,000 Guineas either side of chasing home Godolphin stable companion Coroebus at Newmarket. Even so, on both Racing Post Ratings and BHA ratings he has yet to match his National Stakes tour de force in style or substance.

The key to unlocking even more from Native Trail could be this step up to a mile and a quarter. However, even trainer Charlie Appleby admits to uncertainty about whether the longer trip will be a help or hindrance.

Appleby said: “The question mark with Native Trail is the mile-and-a-quarter trip, but you can take a few pieces out of his pedigree that suggest he has a chance of staying.

“More importantly, he is a strong three-year-old who won’t look out of place against his elders. It’s a great race for three-year-olds with the weight allowance and he goes to Sandown in excellent order.

“We are very much looking forward to seeing how he stacks up and whether we keep to this distance or drop back to a mile for the rest of the season.” 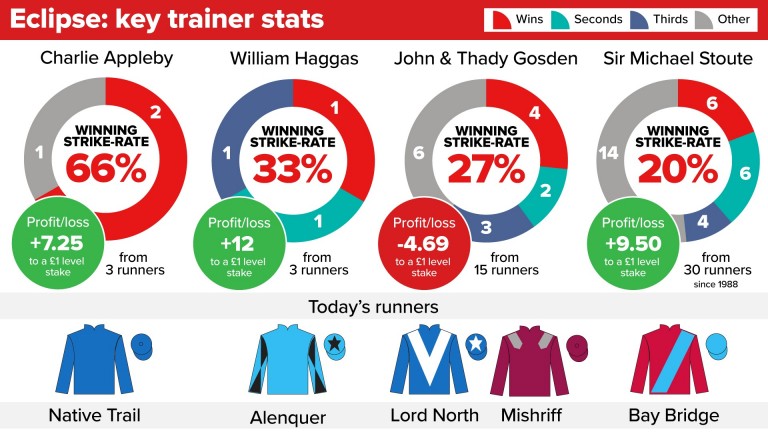 Is Bay Bridge better than he showed at Ascot?

Sir Michael Stoute and Aidan O’Brien share the record for Eclipse wins alongside the late Alec Taylor. With the master of Ballydoyle sitting out this particular party, Stoute will sit alone at the top of the tree if Bay Bridge can give him a seventh success in the Sandown spectacular.

It was 29 years ago that Opera House became Stoute’s first Eclipse winner, while Ulysses took the legendary trainer’s tally to six in 2017. His latest representative is the only member of the six-runner field not to have posted a Group 1 win, although Bay Bridge has had only one opportunity in the top tier, finishing second to State Of Rest in the Prince of Wales’s Stakes 17 days ago. 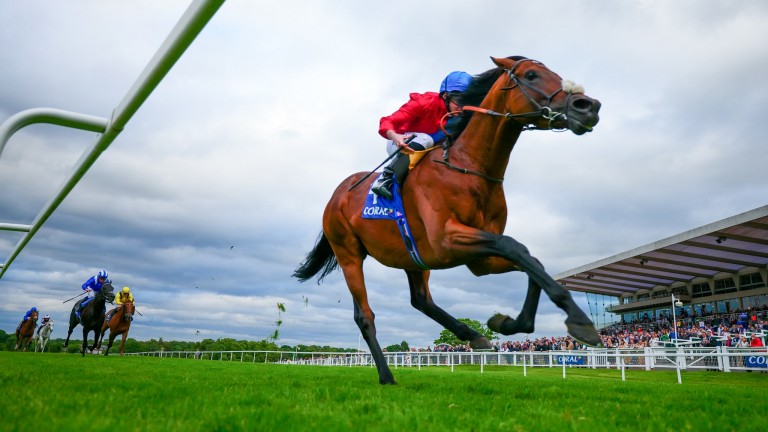 Bay Bridge: could have a big chance if back to the form of his Brigadier Gerard success

That was a fine effort but the mount of Ryan Moore – free to continue his association with Bay Bridge due to the absence of any O’Brien runners – had looked a potential superstar on his previous outing when a superb five-length winner of the Brigadier Gerard Stakes over the Eclipse course and distance.

“I wouldn’t take anything away from the winner at Ascot. We ran a big race and it was good form. We’re happy with our fellow again, he’s in good shape and we hope for the best.”

The 2022 Eclipse is not short on quality but there is an absence of obvious early pace. This has already been recognized by Tom Marquand, but it is not worrying him as he prepares to partner the William Haggas-trained Alenquer.

None of the six runners have shown any liking for racing from the front, and although Alenquer led in last year’s Arc, it was only for the first two furlongs.

Marquand knows a messy contest would not play to the strengths of the extremely likeable Alenquer, who struck in Group 1 company for the first time when overhauling High Definition at the end of a strongly-run Tattersalls Gold Cup. 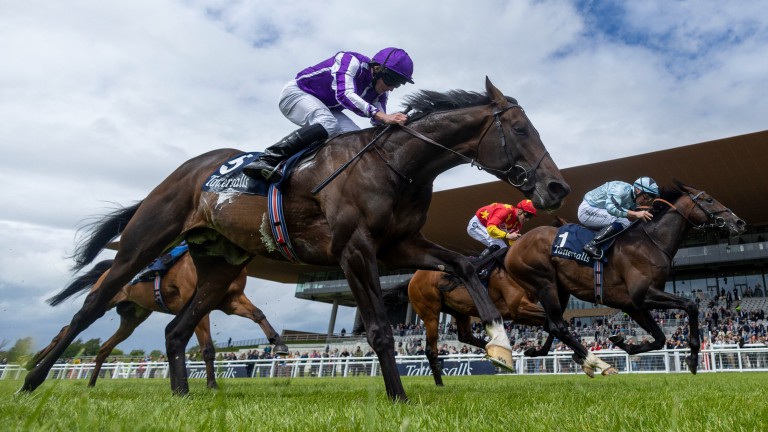